History
The Shogunzords were legendary lost Zords, found by Baboo, Squatt and Finster so that Lord Zedd may use them to conquer Earth. He powered them up and forced the Rangers to pilot them and destroy Earth with them, in exchange for the safety of a kidnapped Kimberly. Tommy got Kimberly back, and Billy gained control of the Shogunzords, and so Zedd lost the upper hand as well as the Shogunzords. The Shogunzords could combine and form the Shogun Megazord, and they could make a pyramid formation which destroyed monsters in a whirlwind. The Shogunzords are humanoid robots of different colors (much like the Alien Rangers’ Battle Borgs) and with different armor around the head, the heads resembling the animals the Ninjazords were based on. The Shogunzords are considerably more useful than the Ninjazords due to their human form

Be the first to review “Shogun Megazord” Cancel reply 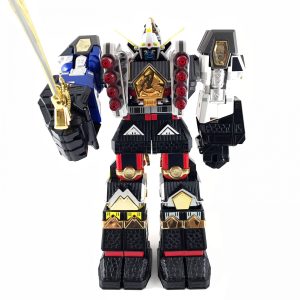 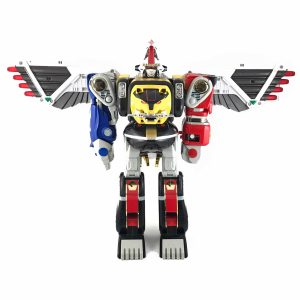